Muffin is a kitten who was born in a foster home to a stray Mama cat that we rescued from outside. In October, Muffin was taken to the Veterinary Specialty Center in Buffalo Grove to see if they could treat a birth defect she has called Flat Chest. Flat Chest is thought to be caused by a collapsed lung suffered shortly after birth. This caused her chest and ribs to flatten out, which has been described as looking like the kitten had been stepped on. The vet was able to surgically attach a splint around her rib cage and sides to help her lungs open up and allow the rib cage an opportunity to return to a normal shape. Her first surgery went well but she did spend the night in the ICU on oxygen because her levels were lower than normal. As if the flat chest wasn’t enough, she was also born with an abnormal rear left leg (visible in her picture).  The vet does not feel that the leg is repairable so there is a chance she could need to have it amputated at some point in the future.  Currently though, it is not causing her any issues.

This little girl sure is determined. When she first got home after having the splint placed, she could hardly move herself around or walk and spent most of the first few days in her foster moms arms. After the first few days, there was no stopping her.

Three weeks later, Muffin had the brace removed.  It seems to have done the job and while she doesn’t look 100% “normal” when she breathes, she look s100% better than before the splint!
Presently, Muffin is doing great in her foster home since having the brace removed three weeks ago. She is go, go, go–always running and playing. Her breathing is better and she is doing ok getting around with her deformed leg.

While medical bills for these special cases such as Muffin’s can be quite costly for an organization such as ours, it is important for us to give her and other special kitties like her the chance to live a normal, happy life.  We are so grateful for the generosity of our donors, sponsors, and supporters who make care for our special kitties, and all of our kitties, possible! 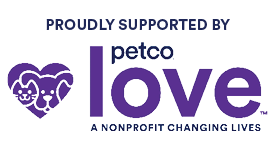